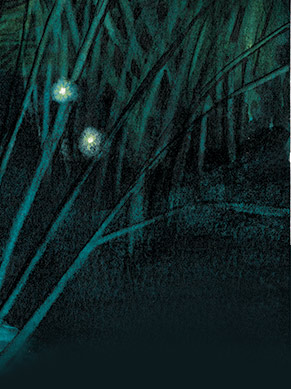 Once Upon a Twice 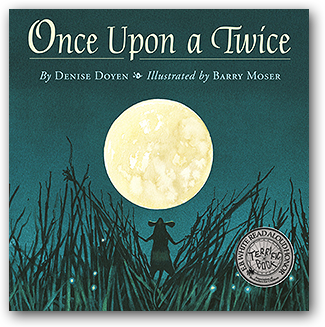 A poetic gem, reminiscent of Jabberwocky.

Out in the open, in the clear,
Where any wisenmouse would fear,
Jam licks his paw, he grooms an ear,
And never hears approaching hisssss . . .

What will happen to the brave mousling, Jam, when he ignores all warnings from his elder mice and sneaks out for a moonlit adventure? Award-winning illustrator Barry Moser has created a dark, vivid mouse world to dramatize this cautionary tale full of clever nonsense words and rhyming prose that will keep kids on the edge of their seats.

"This wonderful book is a marvelous read-aloud that children will want to hear again and again."
—School Library Journal (starred review)

The EB White committee said, "This book was a sleeper and made the short list after one committee member who loved it read it aloud to everyone else. Wonderful writing in the spirit of Lewis Carroll. Enchanting. Tickles the tongue and 'comes to life' as a read aloud."

July 15, 2009
Once Upon a Twice *Starred Review
A foolish mouse is prone to jamming up the line of fellow night-foragers to smell a rose. After nearly becoming a snake's dinner, "Jam" lives on to lecture mouslings on the dangers of moonlit meanders. The lushness here is in Doyen's "Jabberwocky"-inspired verse, delivered chiefly in rhyming four-line stanzas. " 'Beware the dangershine of Moon, / Do not disturb the bugs of June!' / The elder mouncelors whispercroon / A tune that tells Jam what to fear..." The scansion's near perfect, and deliciously inventive words (riskarascal, jaw-claws, furlickt) invite repeat read-alouds.

August 2009
Once Upon a Twice *Starred Review
K-Gr 3—Doyen's utterly sound and alive story is paired with the perfect illustrator, whose deft touch provides all the eeriness that it begs for. The cautionary tale begins with the "eldermice" telling the youngsters who are gathered to play in the night air that the woods and ponds are filled with creatures dangerous to their kind. With gloriously nonsensical words and phrases (e.g., "scritchscrambles"), the author manages to get the point across that there is much to fear in the night. Jam Boy doesn't listen and instead brags that he is unafraid, and he stays to play alone by the pond. Here the language grows taut with suspense,"Half-submerged, a slender queen/Esses 'cross the pond unseen,/Sly serpentine-bound not to miss...." Out of nowhere a snake roils, coils, and lashes. Splash! What has happened to Jam Boy? Children will be sitting on the edge of their seats awaiting some news about their fallen protagonist. Despite the dark feel, there is much to rejoice about in learning of Jam Boy's fate. Ultimately a story of youthful arrogance—or as Doyen calls it, "furry overconfidence"—versus the elders' wise experience, this wonderful book is a marvelous read-aloud that children will want to hear again and again.
—Joan Kindig, James Madison University, Harrisonburg, VA

Booklist Review, July 1, 2009:
"This handsome book offers a terrific opportunity for a capable narrator to deliver a captivating read-aloud."

Syndicated Review, August 24, 2009:
"Once Upon a Twice is one of those amazing books that you and your kids will both love to read aloud for years."

Newsday Review, October 4, 2009:
"Excellent for reading aloud, even to the youngest readers, who will just let the poetic words wash over them."

Sunday, August 23, 2009
Once Upon A Twice Review
Lewis Carroll's poem "Jabberwocky," featured in the companion to Alice in Wonderland, Through The Looking Glass, is considered a masterwork of nonsense verse. Longtime the manxome foe was sought: the student who could match the teacher, and Doyen may have raised the vorpal sword. Using the same structure as "Jabberwocky" (a description of setting, a warning by someone older and wiser, a flouting of good advice, a conflagration, a celebration, and a return to the setting), Doyen takes us into the world of predator and prey. Amidst the titled heads of hungry barn owls and the glow of amphibious eyes, "the world afield is dangerouse./Foraging is—for a mouse—/A nightly knightly duel and joust..." but all the same, a little mouse named Jam ventures an adventure: Out in the open, in the clear,/ Where any wisenmouse would fear,/ Jam licks his paw, he grooms an ear,/ And never hears approaching hisssss. With no shortage of the kind of suspense that keeps eyes wide, acrobatic acts of portmanteau abound, verse winding and then pivoting on its own lyrical scheme with the hypnotic charm of a witch casting a midnight spell.

Against the dark palette, the moon illuminates every page like a flashlight on a secret, nocturnal world; the illustrator's stylistic mix of realism and fancy is fitting. Though the connections to Carroll's work are plain, it's hard not to also be reminded of good ol' Beatrix Potter's Tale of Peter Rabbit in a small creature's brazen oblivion to warnings, and the comeuppance of a good scare. Once Upon a Twice ends with the suggestion to "be forewarned," but like the Disney Alice, you can be sure that "I give myself very good advice, but I very seldom follow it" is a more likely mantra for children and other small creatures. They know their own capacity for mischief and adventure...even the likelihood of it, surely...and at the completion of these pages, they can hold it like their own secret in the dark.

This is beautiful writing with well-matched pictures, deserving of repeated, breathless readings. For the young audience, it will give them a renewed ownership of the validity of their nonsense talk and accidental mixed-up words. I wonder if this will be one of those years where a picture book is considered for the Newbery award? If so, do you think the shiny round sticker will be confused with the moon on the cover? Such problems. (4 and up)
—Esme Raji Codell

Book Review of the Madison Public Library: Madreads
Denise Doyen's debut picture book, Once Upon a Twice is remarkable in the telling. It is Doyen's language, which she frequently invents, combining and creating words like "riskarascal" and "scoutaprowl" which deepens the story, its drama and its meaning, as well as making it a fabulous readaloud experience. It has been compared by many reviewers to Lewis Carroll's "Jabberwocky." You can listen to children recite the poem on You Tube.

It is a rare picture book which engenders Newbery Medal discussion as the Newbery Award may only be given for distinguished writing and may not take illustrations into account unless they detract from the book. Yet Doyen's poem is distinguished by both an elegance and sophistication that surpass the usual picture book fare, and it has received at least a bit of discussion on this Mock Newbery blog.

Heavy Medal: A Mock Newbery Blog School Library Journal—Jonathan Hunt
Once Upon a Twice—December 2, 2009
I continue to look for picture book and easy reader texts that are worthy of Newbery consideration. While reading through the Kirkus Best Children's Books, I came across the following description.

In the inspired silly style of Lewis Carroll and Edward Lear, first-time author Denise Doyen teams up with award-winning illustrator Barry Moser to unveil the delightful cautionary tale of a wayward mouse who dawdles in the moonlight and almost doesn't live to warn others of his folly. Told in tightly rhymed verse peppered with wonderfully inventive words like riskarascal, scoutaprowl, qui-etiquette and set alongside Moser's lush watercolor renderings of the nocturnal mouseling world, Doyen's frisky nonsense poem begs for numerous rereadings.

Naturally, I sought out a copy and have been reading and reflecting on its Newbery potential. It does take a couple readings to find a natural storytelling voice that maximizes the rhythms and cadences of the text, but then it quickly becomes infectious.

Jerry Griswold, Director San Diego State Univ.'s National Center for the Study of Children's Literature
The Good Sense of Nonsense
...All this reminds me of a favorite book from the last year: Denise Doyen's Once Upon a Twice. That picture book fits comfortably in the category of Mouse Tales: telling the story of a daring mouse (à la Kate DiCamillo's The Tale of Desperaux) who gets into nocturnal trouble. The illustrations are by the gifted artist Barry Moser who does a bang-up job here with ground-level views of a darkened mouse world. But mostly what I like is Doyen's language. Once Upon a Twice is full of the dazzle of language invention as Doyen tells about her "risakarascal" mouse who ignores "preycautions" to "wanderyonder."

A Review of Once Upon a Twice by author & writing instructor, Kate Coombs
September 13, 2009
I often caution beginning picture book writers to avoid rhyme, especially since they tend to attempt to channel Seuss. It takes true poetic mastery to avoid writing in rhyme that calls too much attention to itself and clonks at the end of every line. Fortunately, Denise Doyen knows what she's doing.

In this mousely epic, we learn of a little mouse named Jam who is bold and curious and full of mischief. The elders of his tribe notice his antics and warn him, white beards quivering, that his approach to life isn't nearly cautious enough and will get him into big trouble. Heedless Jam skitters off along the lake's edge and—gets into big trouble.

I'm not fond of cautionary tales, but this one is told with great glee. The tone verges on tongue-in-cheek, which I think redeems it. Best of all is Doyen's use of rhythm and rhyme, especially some well-chosen made-up words with a distinctly mouse-ish feel.

Children will relate to "riskarascal" Jam, who thinks the grown-ups are no fun and are overreacting with their numerous "preycautions." For their part, parents and teachers will enjoy reading Once Upon a Twice out loud; it rolls off the tongue much like Margaret Mahy's recent book, Bubble Trouble.

There's something literary about this book, which stands out in a crop of newly published picture books that are trying too hard to be commercial. I recommend Once Upon a Twice mostly because of Doyen's lovingly crafted language, but then, the story is also a lot of fun!